The Lion and the Ass 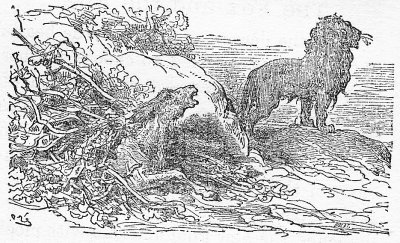 A LION and an Ass made an agreement to go out hunting together. By-and-by they came to a cave, where wild goats abode. The Lion took up his station at the mouth of the cave, and the Ass, going within, kicked and brayed, and made a mighty fuss to frighten them out. When the Lion caught them, the Ass came out and asked him if he had not made a noble fight.Yes, indeed, said the Lion; and I assure you, you would have to frighten me too, if I had not known you to be an Ass.