The Fox and the Goat 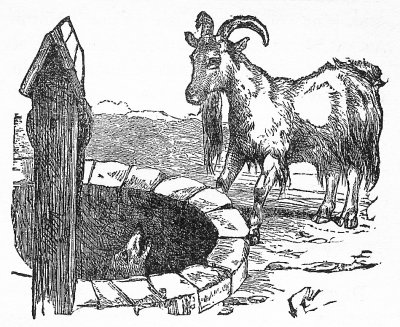 A FOX, having fallen into a well, could find no means of escape. A Goat, overcome with thirst, came to the well, and, seeing the Fox, inquired if the water was good. The Fox, concealing his sad plight under a merry guise, indulged in a lavish praise of the water, saying it was beyond measure excellent, and encouraged him to descend.

The Goat, mindful only of his thirst, thoughtlessly jumped down, when, just as he quenched his thirst, the Fox informed him of the difficulty they were both in, and suggested a scheme for their common escape. If, said he: you will place your forefeet upon the wall, and bend your head, I will run up your back and escape, and will help you out. On the Goat readily assenting to this proposal, the Fox leaped upon his back, and steadying himself with the goat's horns, reached in safety the mouth of the well, and immediately made off as fast as he could.

When the Goat upbraided him with the breach of his bargain, he turned round and cried out: You foolish fellow! If you had as many brains in your head as you have hairs in your beard, you would never have gone down before you had inspected the way up, nor have exposed yourself to dangers from which you had determined upon no means of escape.

Moral:
Look before you leap.

The Dog and the OysterThe Two Soldiers and the RobberThe Dog, Cock, and FoxThe Horse and His RiderThe Fox and the ApeThe Lion and the WolfThe Old Man and DeathThe Fighting Cocks and the EagleThe Blind Man and the WhelpThe Hen and the Golden EggsThe Wolves and the SheepThe Hare and the TortoiseThe Fawn and His MotherThe Fox Who Had Lost His TailThe Sick KiteThe Travelers and the Plane-TreeThe Cat and the CockThe Dove and the CrowThe Bull and the CalfThe Boy Bathing
Link To This Page