The Fox and the Ape 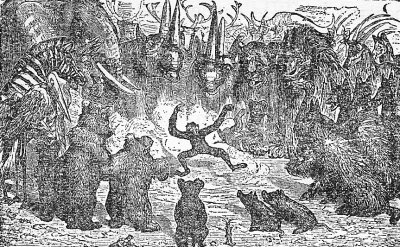 UPON the decease of the Lion, the beasts of the forest assembled to choose another king. The ape played so many grimaces, gambols and antic tricks, that he was elected by a large majority; and the crown was placed upon his head. The Fox, envious of this distinction, seeing, soon after, a trap baited with a piece of meat, approached the new king, and said with mock humility: May it please your majesty, I have found on your domain a treasure, to which, if you will deign to accompany me, I will conduct you. The Ape thereupon set off with the Fox, and, on arriving at the spot, laid his paw upon the meat. Snap! went the trap, and caught him by the fingers. Mad with shame and the pain, he reproached the Fox for a false thief and a traitor. Reynard laughed heartily, and said, with a sneer: You a king, and not understand a trap!