The Fox and the Lion 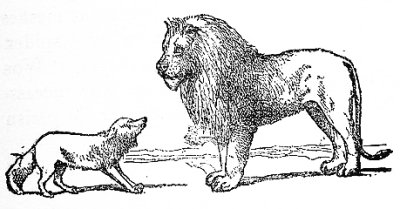 A FOX who had never yet seen a Lion, when he fell in with him by a certain chance for the first time in the forest, was so frightened that he was near dying with fear. On his meeting with him for the second time, he was still much alarmed, but not to the same extent as at first. On seeing him the third time, he so increased in boldness that he went up to him, and commenced a familiar conversation with him. 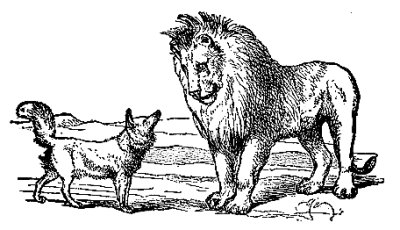 The Blind Man and the WhelpThe Heifer, The Goat, The Sheep, And The LionThe Ass, the Cock, and the LionThe Widow and the SheepThe Madman Who Sold WisdomThe Fox and the ApeThe Fox Who Had Lost His TailThe Cat and the FoxThe Game-cocks and the PartridgeThe Boy and the NettlesThe Brazier and His DogThe Leopard and the FoxThe Hare Afraid Of His EarsThe Fisherman PipingThe Sick KiteThe Miller, His Son, and Their AssThe Wolf, The Goat, And The KidThe Peacock and the CraneThe Fox and the MonkeyThe Tortoise and the Eagle