The Eagle and the Fox 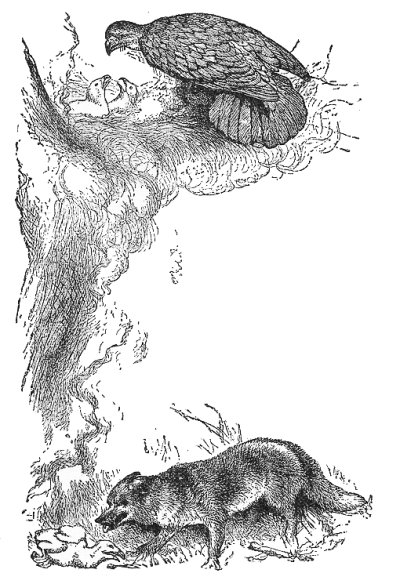 AN EAGLE and a Fox formed an intimate friendship, and decided to live near each other. The Eagle built her nest in a tall tree, while the Fox crept into the underwood and there produced her young.

Not long after, when the Fox was ranging for food, the Eagle, being in want of provision for her young ones, swooped down and seized upon one of the little cubs, and feasted herself and brood. The Fox on her return, discovered what had happened, but was less grieved for the death of her young than for her inability to avenge them.

A just retribution, however, quickly fell upon the Eagle. While hovering near an altar, on which some villagers were sacrificing a goat, she suddenly seized a piece of the flesh, and carried with it to her nest, a burning cinder. A strong breeze soon fanned the spark into a flame, and the eaglets, as yet unfledged, and helpless, were roasted in their nest and dropped down dead at the bottom of the tree. The Fox gobbled them up in the sight of the Eagle.

Moral:
The tyrant is never safe from those whom he oppresses.

The Owl and the GrasshopperThe Farmer and the CranesThe Thrush and the SwallowThe Fox and the MonkeyThe Boasting TravelerThe Ass Carrying the ImageThe Wolf and the SheepThe Dog and the HareThe Stag and the FawnThe Stag, the Wolf, and the SheepThe Thief and His MotherThe Boar and the AssThe Wolf and the House-dogThe Thief and the HousedogThe Crow and the PitcherThe Wild Ass and the LionThe Hares and the FrogsThe Mother and the WolfThe Boy and the FilbertsThe Fox and the Hedgehog