The Boar and the Ass 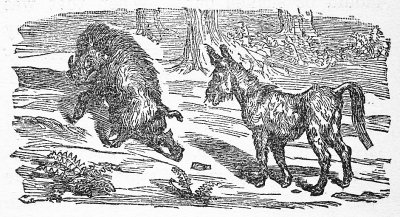 A LITTLE SCOUNDREL of an ass, happening to meet with a boar, had a mind to be arch upon him, and so, says he: Your humble servant. The Boar, somewhat nettled at his familiarity, bristled up to him, and told him he was surprised to hear him utter so impudent an untruth, and was just going to show his resentment by giving him a rip in the flank; but wisely stifling his passion, he contented himself with saying: Go, you sorry beast! I do not care to foul my tusks with the blood of so base a creature.

Moral:
Dignity cannot afford to quarrel with its inferiors.