The Buffoon and the Countryman 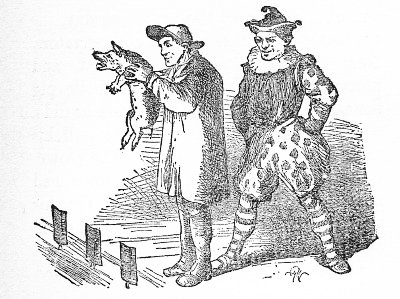 A RICH NOBLEMAN once opened the theater to the public without charge, and gave notice that he would handsomely reward anyone who would produce a new amusement.

A Buffoon, well known for his jokes, said that he had a kind of entertainment that had never been produced in a theater. This report, being spread about, created a great stir in the place, and the theater was crowded to see the new entertainment. The Buffoon appeared, and imitated the squeaking of a little pig so admirably with his voice, that the audience declared that he had a porker under his cloak, and demanded that it should be shaken out. When that was done, and yet nothing was found, they cheered the actor, with the loudest applause.

A Countryman in the crowd proclaimed that he would do the same thing on the next day. On the morrow a still larger crowd assembled in the theater. Both of the performers appeared on the stage. The Buffoon grunted and squeaked, and obtained, as on the preceding day, the applause and cheers of the spectators. Next the Countryman commenced, and pretending that he concealed a little pig beneath his clothes (which in truth he did) contrived to lay hold of and to pull his ear, when he began to squeak.

The Crowd, however, cried out that the Buffoon had given a far more exact imitation. On this the Rustic produced the pig, and showed by them the greatness of their mistake.

Moral:
Critics are not always to be depended upon.

The Buffoon and the Countryman - Aesop
Link To This Page