The Ass and the Charger 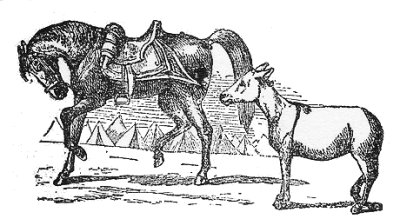 AN ASS congratulated a Horse on being so ungrudgingly and carefully provided for, while he himself had scarcely enough to eat, nor even that without hard work. But when war broke out, a heavily armed soldier mounted the Horse, and rushed into the very midst of the enemy, and the Horse, being wounded, fell dead on the battle-field.

Then the Ass, seeing all these things, changed his mind, and commiserated the Horse, saying: How much more fortunate am I than a charger. I can remain at home in safety while he is exposed to all the perils of war.

Moral:
Be not hasty to envy the condition of others.