The Dog and the Shadow

A DOG, crossing a bridge over a stream with a piece of flesh in his mouth, saw his own shadow in the water, and took it for another Dog, with a piece of meat double his own in size. He therefore let go his own, and fiercely attacked the other Dog, to get his largest piece from him. He thus lost both - that which he grasped at in the water, because it was a shadow; and his own, because the stream swept it away.

Moral:
It is not wise to be too greedy. 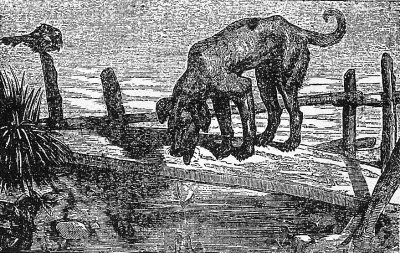 The Frogs Asking for a KingThe Peacock and the CraneThe Horse and the WolfThe Wolf and the House-dogThe Quack FrogThe Dogs and the HidesThe Stag, the Wolf, and the SheepThe Wolf and the LambThe Hare Afraid Of His EarsThe Horse and His RiderThe Town Mouse and the Country MouseThe Ass Carrying the ImageThe Fox and the TurkeysThe Brazier and His DogThe Bear and the GardenerThe Flies and the HoneyThe King's Son and the Painted LionThe Shepherd and the SheepThe Wind And The SunThe Cock and the Jewel