The Horse and His Rider 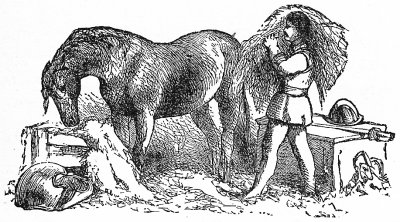 A HORSE SOLDIER took great pains with his charger. As long as the war lasted, he looked upon him as his fellow-helper in all emergencies, and fed him carefully with hay and corn. But when the war was over, he only allowed him chaff to eat and made him carry heavy loads of wood, and subjected him to much slavish drudgery and ill-treatment.

War, however, being again proclaimed, the Soldier put on his charger its military trappings, and mounted, being clad in his heavy coat of mail. The Horse fell down straightway under the weight, no longer equal to the burden, and said to his master: You must now e'en go to the war on foot, for you have transformed me from a Horse into an Ass.

Moral:
He who slights his friends when they are not needed must not expect them to serve him when he needs them.

The Stag at the PoolThe Fighting Cocks and the EagleThe Man and His Two WivesThe Man and the LionThe Playful AssThe Bear and the Two TravelersThe Wild Ass and the LionThe Leopard and the FoxThe Crow and the PitcherThe Fox and the ApeThe Bees, The Drones, And The WaspThe Ass and His ShadowThe Hawk, the Kite, and the PigeonsThe Farmer and His SonsThe Gnat and the BullThe Ass and the WolfThe Dogs and the FoxThe Dog And His Master's DinnerThe Trumpeter Taken PrisonerThe Kid and the Wolf (1)