The Ass and His Shadow 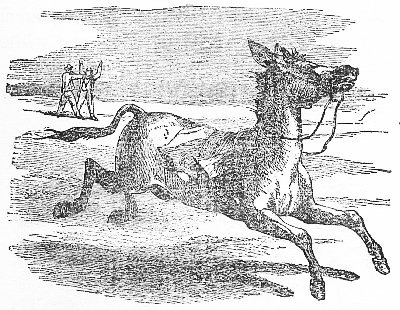 A TRAVELER hired an Ass to convey him to a distant place. The day being intensely hot, and the sun shining in its strength, the Traveler stopped to rest, and sought shelter from the heat under the Shadow of the Ass. As this afforded only protection for one, and as the Traveler and the owner of the Ass both claimed it, a violent dispute arose between them as to which of them had the right to it. The owner maintained that he had let the Ass only, and not his Shadow. The Traveler asserted that he had, with the hire of the Ass, hired his Shadow also. The quarrel proceeded from words to blows, and while the men fought, the Ass galloped off.

Moral:
In quarreling about the shadow, we often lose the substance.

The Stag, the Wolf, and the SheepThe Bulls and the FrogsThe Ox and the FrogThe Hare and the TortoiseThe Geese and the CranesThe Goat and the AssThe Two Soldiers and the RobberThe Stag and the FawnThe Cat and the BirdsThe Great and the Little FishesThe Boar and the AssThe Ass and His PurchaserThe Monkey and the DolphinThe Raven and the SwanThe Father and His SonsThe Shepherd's Boy and the WolfThe Horse and GroomThe Viper and the FileThe Dog And His Master's DinnerThe Wolf and the Shepherd