The Miller, His Son, and Their Ass

A MILLER and his son were driving their Ass to a fair. On the way they met a troop of girls. Look there! cried one of them, did you ever see such fools, to be trudging along on foot when they might be riding? The old Man, hearing this, quietly bade his Son to get on Ass, and walked along merrily by his side.

Presently they came to a group of old men in earnest debate. There, said one of them, it proves what I was saying. What respect is shown to old age in these days? Do you see that idle young rogue riding, while his old father has to walk? - Get down, you scapegrace! and let the old man rest his weary limbs. Upon this the Father made his son dismount, and got up himself.

In this manner they had not proceeded far when they met a company of women and children. Why, you lazy old fellow! cried several tongues at once, how can you ride upon the beast, while that poor little lad there can hardly keep pace by the side of you? The good-natured Miller immediately took up his son behind him.

They had now almost reached the town. Pray, honest friend, said a townsman, is that Ass your own? Yes, says the old Man. Oh! One would not have thought so by the way you load him. Why, you two fellows are better able to carry the poor beast than he you! Anything to please you, said the old Man. So, alighting with his son, they tied the Ass's legs together, and by the help of a pole endeavored to carry him on their shoulders over a bridge. 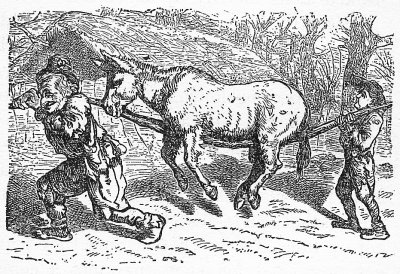 The people ran out in crowds to laugh at the sight; till the Ass, not liking the noise nor his situation, kicked asunder the cords and, tumbling off the pole, fell into the river. Upon this the old Man, made the best of his way home with his Son - convinced that, by endeavoring to please everybody, he had succeeded in pleasing nobody, and lost his Ass into the bargain. 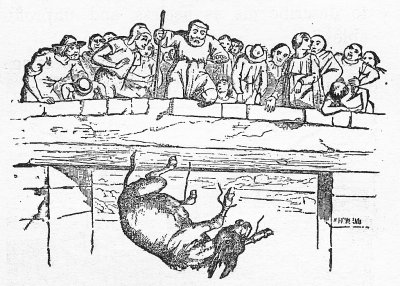 Moral:
By endeavoring to please everybody, one succeeds in pleasing nobody.

The Wolf and the LionThe Viper and the FileThe Horse and the StagThe Mouse and the Boasting RatThe Dog and the OysterThe Farmer and His SonsThe Fox and the GrapesThe Cat and the CockThe Fighting Cocks and the EagleThe Travelers and the Plane-TreeThe Wolf, The Goat, And The KidThe Widow and her Little MaidensThe Kid and the Wolf (1)The Wolf Turned ShepherdThe Stag and the FawnThe Cat and the MiceThe Charcoal-Burner and the FullerThe Cat, the Weasel, and the RabbitThe Ass, the Cock, and the LionThe Bear and the Two Travelers