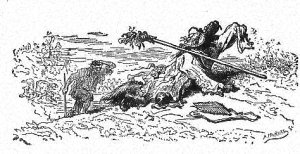 Moral:
Those who attempt to act in disguise are apt to overdo it.