The Fox and the Tiger 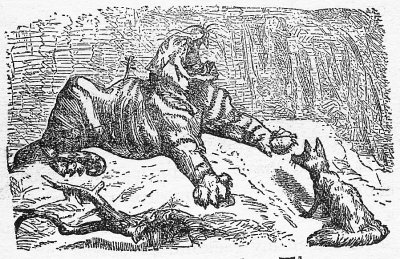 A SKILLFUL ARCHER, coming into the woods, directed his arrows so successfully that he slew many wild beasts, and pursued several others. This put the whole savage kind into a fearful consternation, and made them fly to the most retired thickets for refuge. At last, the Tiger resumed courage, and, bidding them not to be afraid, said that he alone would engage the enemy; telling them that they might depend upon his valor and strength to revenge their wrongs.

In the midst of these threats, while he was lashing himself with his tail, and tearing up the ground for anger, an arrow pierced his ribs, and hung by its barbed point in his side. He set up an hideous and loud roar, occasioned by the anguish which he felt, and endeavored to draw out the painful dart with his teeth; when the Fox, approaching him, inquired with an air of surprise who it was that could have strength and courage enough to wound so mighty and valorous a beast! Ah! says the Tiger, I was mistaken in my reckoning: it was that invincible man yonder.

Moral:
There is always some vulnerable part in the strongest armor.