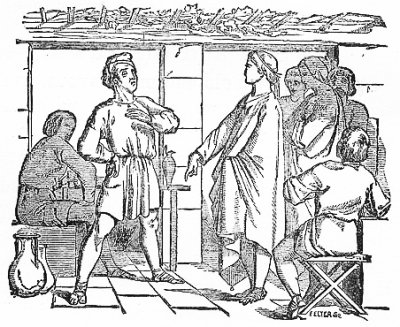 A MAN who had traveled in foreign lands boasted very much, on returning to his own country, of the many wonderful and heroic things he had done in the different places he had visited. Among other things, he said that when he was at Rhodes he had leaped to such a distance that no man of his day could leap anywhere near him - and as to that there were in Rhodes many persons who saw him do it, and whom he could call as witnesses. One of the by-standers interrupting him, said: Now, my good man, if this be all true, there is no need of witnesses. Suppose this to be Rhodes; and now for your leap.

Moral:
Cure a boaster by putting his words to the test.

The Great and the Little FishesThe Widow and her Little MaidensThe Goat and the AssThe Thrush and the SwallowThe Viper and the FileThe Crow and the PitcherThe Fox and the GrapesThe Ass Carrying the ImageThe Cat and the BirdsThe Mules and the RobbersThe Thirsty PigeonThe Hen and the Golden EggsThe Bees, The Drones, And The WaspThe Man and the LionThe Stag and the FawnThe Oak and the ReedsThe Farmer and the CranesThe Lion and the AssThe Oxen and the ButchersThe Dog and the Shadow
Link To This Page