The Dog And His Master's Dinner 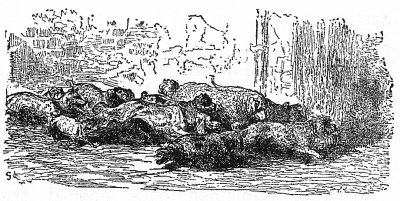 A DOG had been taught to take his master's dinner to him every day. As he smelled the good things in the basket, he was sorely tempted to taste them, but he resisted the temptation and continued day after day to carry the basket faithfully.

One day, all the dogs in the neighborhood followed him with longing eyes and greedy jaws, and tried to steal the dinner from the basket. At first, the faithful dog tried to run away from them, but they pressed him so close that at last he stopped to argue with them. This is what the thieves desired, and they soon ridiculed him to the extent that he said: Very well, I will divide with you, and he seized the best piece of chicken in the basket and left the rest for the others to enjoy.

Moral:
He who stops to parley with temptation, will be very likely to yield.

The AstronomerThe Fox Who Had Lost His TailThe Buffoon and the CountrymanThe Game-cocks and the PartridgeThe Tortoise and the Two DucksThe Farmer and the CranesThe Fox and the TurkeysThe Horse and the AssThe Dog and the HareThe Cat and the BirdsThe Mouse and the WeaselThe Two FrogsThe Birds, the Beasts, and the BatThe Swan and the GooseThe Old Woman and the Wine-JarThe Wolf and the ShepherdThe Mischievous DogThe Shepherd and the SheepThe Lark and Her Young OnesThe Dog, Cock, and Fox