The Tortoise and the Two Ducks 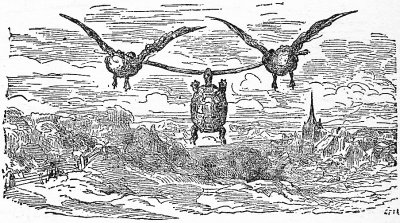 A TORTOISE, becoming tired of her humble home, resolved to visit foreign lands, but she did not know which way to go. She repaired to two ducks to show her the road, and they told her that the best way was to travel through the air. On her imploring their help, they made her grasp a stick with her mouth, and so they bore her aloft. As they flew along, the gaping people beneath shouted at the sight of the spectacle. The vain tortoise mistook their shouts for applause. I am surely a queen, said she. But alas! as she opened her mouth to speak, she lost her hold of the stick, and, falling to the ground, was dashed into pieces.

Moral:
Those who are not able to roam should stay at home.

The Thief and the HousedogThe Ass in the Lion's SkinThe Kid and the WolfThe Boys and the FrogsThe Lion And The GnatThe Wolf, The Goat, And The KidThe Fisherman and the Little FishThe Dog And His Master's DinnerThe Fox and the GoatThe Kid and the Wolf (1)The Bees, The Drones, And The WaspThe Wolf and the LionThe Stag at the PoolThe Boar and the AssThe Brazier and His DogThe Two FrogsThe Shepherd and the SheepThe Shepherd and the WolfThe Blind Man and the WhelpThe Peacock and the Magpie