The Frogs Asking for a King 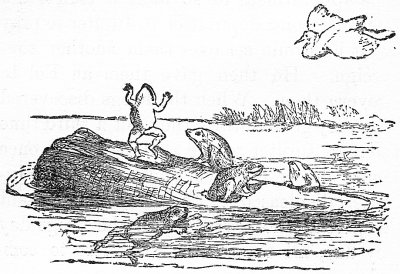 THE FROGS, grieved at having no established Ruler, sent ambassadors to Jupiter entreating for a King.

He, perceiving their simplicity, cast down a huge log into the lake. The Frogs, terrified at the splash occasioned by its fall, hid themselves in the depth of the pool. But no sooner did they see that the huge log continued motionless, than they swam again to the top of the water, dismissed their fears, and came so to despise it as to climb up, and to squat upon it..

After some time they began to think themselves ill-treated in the appointment of so inert a Ruler, and sent a second deputation to Jupiter to pray that he would set over them another sovereign.

He then gave them an Eel to govern them. When the Frogs discovered his easy good nature, they yet a third time sent to Jupiter to beg that he would once more choose for them another King.

Jupiter, displeased with all their complaints, sent a Heron, who preyed upon the Frogs day by day, till there were none left to complain.

Moral:
When you seek to change your condition, be sure that you can better it.