The Lion and the Mouse 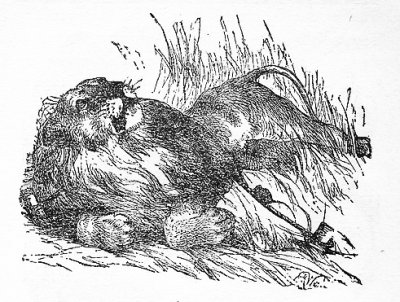 A LION was awakened from sleep by a Mouse running over his face. Rising up in anger, he caught him and was about to kill him, when the Mouse piteously entreated, saying: If you would only spare my life, I would be sure to repay your kindness. The Lion laughed and let him go.

It happened shortly after this that the Lion was caught by some hunters, who bound him by strong ropes to the ground. The Mouse, recognizing his roar, came up and gnawed the rope with his teeth, and setting him free, exclaimed: You ridiculed the idea of my ever being able to help you, not expecting to receive from me any repayment of your favor; but now you know that it is possible for even a Mouse to confer benefits on a Lion.

Moral:
No one is too weak to do good.

The Kid and the WolfThe MuleThe Thrush and the SwallowThe Gnat and the LionThe Peacock and the MagpieThe Wolf Turned ShepherdThe Hare Afraid Of His EarsThe Trumpeter Taken PrisonerThe Man Bitten by a DogThe Kites and the SwansThe Mouse and the Boasting RatThe Wolf and the HorseThe Blind Man and the WhelpThe Ass Carrying the ImageThe Boy and the NettlesThe Horse and the WolfThe Great and the Little FishesThe Stag, the Wolf, and the SheepThe Dog and the HareThe Owl and the Grasshopper