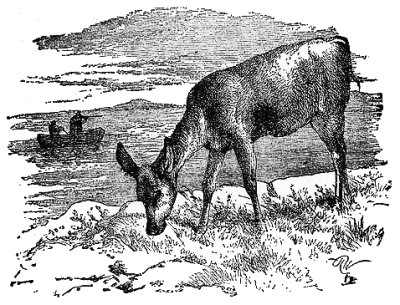 A DOE blind of an eye, was accustomed to graze as near to the edge of the sea as she possibly could, to secure greater safety. She turned her eye towards the land, that she might perceive the approach of a hunter or hound, and her injured eye towards the sea, from which she entertained no anticipation of danger.

Some boatmen, sailing by, saw her, and taking a successful aim, mortally wounded her. Said she: O wretched creature that I am, to take such precaution against the land, and, after all, to find this seashore, to which I had come for safety, so much more perilous.

Moral:
Danger sometimes comes from a source that is least suspected.

The Three TradesmenThe Widow and her Little MaidensThe Seaside TravelersThe Swallow and the CrowThe Dog Whose Ears Were CroppedThe Tortoise and the EagleThe Lion And The GnatThe Dog, Cock, and FoxThe Fowler and the RingdoveThe Wolves and the SheepThe Hares and the FrogsThe ProphetThe Man and the LionThe Farmer and His SonsThe Eagle, the Cat, and the Wild SowThe Fox and the CrowThe Thief and His MotherThe Kid and the Wolf (1)The Vine and the GoatThe Farmer and the Stork

The One-Eyed Doe - Aesop
Link To This Page