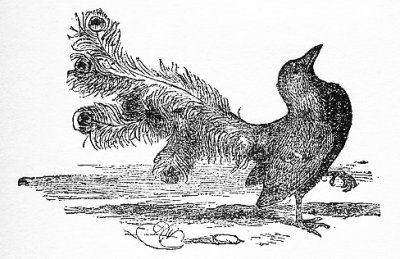 JUPITER determined, it is said, to create a sovereign over the birds, and made proclamation that, on a certain day, they should all present themselves before him, when he would himself choose the most beautiful among them to be king.

The Jackdaw, knowing his own ugliness, searched through the woods and fields, and collected the feathers which had fallen from the wings of his companions, and stuck them in all parts of his body.

When the appointed day arrived, and the birds had assembled before Jupiter, the Jackdaw also made his appearance in his many feathered finery. On Jupiter proposing to make him king, on account of the beauty of his plumage, the birds indignantly protested, and each plucking from him, his own feathers, the Jackdaw was again nothing but a Jackdaw.

Moral:
Hope not to succeed in borrowed plumes.

The Lion and the MouseThe Sick KiteThe Horse and the Loaded AssThe Ass Carrying the ImageThe Miller, His Son, and Their AssThe Hunter and the WolfThe Fighting Cocks and the EagleThe Wolf and the GoatThe Kid and the Wolf (1)The Seagull and the KiteThe Fox and the WoodcutterThe Bald KnightThe Man and the LionThe Swallow and the CrowThe Countryman and the SnakeThe Ass and the GrasshopperThe ProphetThe Eagle and the KiteThe Wild Boar and the FoxThe Ass and the Lap-Dog

The Vain Jackdaw - Aesop
Link To This Page