The Ass and the Lap-Dog 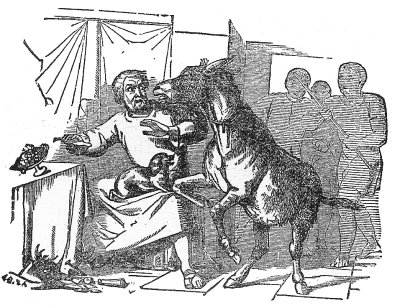 A MAN had an Ass, and a Maltese Lap-dog, a very great beauty. The Ass was left in a stable, and had plenty of oats and hay to eat, just as any other Ass would. The Lapdog was a great favorite with his master, and he frisked and jumped about him in a manner pleasant to see. The Ass had much work to do, in grinding the corn-mill, and in carrying wood from the forest, or burdens from the farm. He often lamented his own hard fate, and contrasted it with the luxury and idleness of the Lapdog, till at last one day he broke his halter, and galloped into his master's house, kicking up his heels without measure, and frisking and fawning as well as he could.

He next tried to jump about his master as he had seen the Lap-dog do, but he broke the table and smashed all the dishes upon it to atoms. He then attempted to lick his master, and jumped upon his back. The servants, hearing the strange hubbub, and perceiving the danger of their master, quickly relieved him, and drove out the Ass to his stable, with kicks and clubs and cuffs. The Ass, beaten nearly to death, thus lamented: I have brought it all on myself! Why could I not have been contented to labor with my companions, and not try to live by idleness?

The Bear and the Two TravelersThe Cat, the Weasel, and the RabbitThe Bear and the FoxThe Dog Invited To SupperThe Fir-Tree and the BrambleThe Fowler and the RingdoveThe Old Man and the Three Young MenThe Miller, His Son, and Their AssThe Man and the LionThe Fox and the TurkeysThe Bees, The Drones, And The WaspThe Peacock and the CraneThe Farmer and His SonsThe Shepherd's Boy and the WolfThe Hunter and the WolfThe Swan and the GooseThe Shepherd and the SheepThe Fox and the GrapesThe Dog and the HareThe Hawk, the Kite, and the Pigeons
Link To This Page