Part III. The Arrival Of The Prince

The bells in the city are ringing merrily, said the fir, and the music in the cathedral is louder and more beautiful than before. Can it be that the prince has already come into the city?

No, cried the pine-tree, look to the east and see the Christmas day a-dawning! The prince is coming, and his pathway is through the forest!

The storm had ceased. Snow lay upon all the earth. The hills, the forest, the city, and the meadows were white with the robe the storm-king had thrown over them. Content with his wondrous work, the storm-king himself had fled to his far Northern home before the dawn of the Christmas day. Everything was bright and sparkling and beautiful. And most beautiful was the great hymn of praise the forest sang that Christmas morning, -- the pine-trees and the firs and the vines and the snow-flowers that sang of the prince and of his promised coming.

Wake up, little one, cried the vine, for the prince is coming!

But Barbara slept; she did not hear the vine's soft calling nor the lofty music of the forest.

A little snow-bird flew down from the firtree's bough and perched upon the vine, and carolled in Barbara's ear of the Christmas morning and of the coming of the prince. But Barbara slept; she did not hear the carol of the bird.

Alas! sighed the vine, Barbara will not awaken, and the prince is coming.

Then the vine and the snowdrop wept, and the pine-tree and the fir were very sad.

The prince came through the forest clad in royal raiment and wearing a golden crown. Angels came with him, and the forest sang a great hymn unto the prince, such a hymn as had never before been heard on earth. The prince came to the sleeping child and smiled upon her and called her by name.

Barbara, my little one, said the prince, awaken, and come with me. 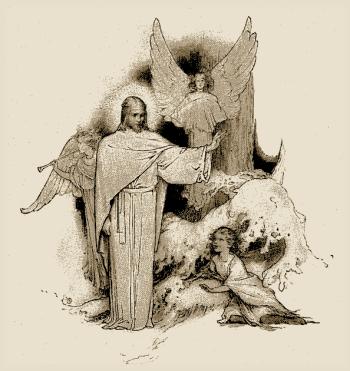 Then Barbara opened her eyes and beheld the prince. And it seemed as if a new life had come to her, for there was warmth in her body and a flush upon her cheeks and a light in her eyes that were divine. And she was clothed no longer in rags, but in white flowing raiment; and upon the soft brown hair there was a crown like those which angels wear. And as Barbara arose and went to the prince, the little snowflake fell from her cheek upon her bosom, and forthwith became a pearl more precious than all other jewels upon earth.

And the prince took Barbara in his arms and blessed her, and turning round about, returned with the little child unto his home, while the forest and the sky and the angels sang a wondrous song.

The city waited for the prince, but he did not come. None knew of the glory of the forest that Christmas morning, nor of the new life that came to little Barbara.

Come thou, dear Prince, oh, come to us this holy Christmas time! Come to the busy marts of earth, the quiet homes, the noisy streets, the humble lanes; come to us all, and with thy love touch every human heart, that we may know that love, and in its blessed peace bear charity to all mankind!