What do you see up there, O pine-tree? asked a little vine in the forest. You lift your head among the clouds to-night, and you tremble strangely as if you saw wondrous sights.

I see only the distant hill-tops and the dark clouds, answered the pine-tree. And the wind sings of the snow-king to-night; to all my questionings he says, 'Snow, snow, snow,' till I am wearied with his refrain.

But the prince will surely come to-morrow? inquired the tiny snowdrop that nestled close to the vine.

Oh, yes, said the vine. I heard the country folks talking about it as they went through the forest to-day, and they said that the prince would surely come on the morrow.

What are you little folks down there talking about? asked the pine-tree.

We are talking about the prince, said the vine.

Yes, he is to come on the morrow, said the pine-tree, but not until the day dawns, and it is still all dark in the east.

Yes, said the fir-tree, the east is black, and only the wind and the snow issue from it.

Keep your head out of my way! cried the pine-tree to the fir; with your constant bobbing around I can hardly see at all.

Take that for your bad manners, retorted the fir, slapping the pine-tree savagely with one of her longest branches.

The pine-tree would put up with no such treatment, so he hurled his largest cone at the fir; and for a moment or two it looked as if there were going to be a serious commotion in the forest.

Hush! cried the vine in a startled tone; there is some one coming through the forest.

The pine-tree and the fir stopped quarrelling, and the snowdrop nestled closer to the vine, while the vine hugged the pine-tree very tightly. All were greatly alarmed.

Nonsense! said the pine-tree, in a tone of assumed bravery. No one would venture into the forest at such an hour.

Indeed! and why not? cried a child's voice. Will you not let me watch with you for the coming of the prince?

Will you not chop me down? inquired the pine-tree gruffly.

Will you not tear me from my tree? asked the vine.

Will you not pluck my blossoms? plaintively piped the snowdrop.

No, of course not, said Barbara; I have come only to watch with you for the prince.

Then Barbara told them who she was, and how cruelly she had been treated in the city, and how she longed to see the prince, who was to come on the morrow. And as she talked, the forest and all therein felt a great compassion for her.

Lie at my feet, said the pine-tree, and I will protect you.

Nestle close to me, and I will chafe your temples and body and limbs till they are warm, said the vine.

Let me rest upon your cheek, and I will sing you my little songs, said the snowdrop.

And Barbara felt very grateful for all these homely kindnesses. She rested in the velvety snow at the foot of the pine-tree, and the vine chafed her body and limbs, and the little flower sang sweet songs to her.

Whirr-r-r, whirr-r-r! There was that noisy wind again, but this time it was gentler than it had been in the city.

Here you are, my little Barbara, said the wind, in kindly tones. I have brought you the little snowflake. I am glad you came away from the city, for the people are proud and haughty there; oh, but I will have my fun with them!

Then, having dropped the little snowflake on Barbara's cheek, the wind whisked off to the city again. And we can imagine that it played rare pranks with the proud, haughty folk on its return; for the wind, as you know, is no respecter of persons.

Dear Barbara, said the snowflake, I will watch with thee for the coming of the prince.

And Barbara was glad, for she loved the little snowflake, that was so pure and innocent and gentle.

Tell us, O pine-tree, cried the vine, what do you see in the east? Has the prince yet entered the forest?

The east is full of black clouds, said the pine-tree, and the winds that hurry to the hill-tops sing of the snow.

But the city is full of brightness, said the fir. I can see the lights in the cathedral, and I can hear wondrous music about the prince and his coming.

Yes, they are singing of the prince in the cathedral, said Barbara sadly.

But we shall see him first, whispered the vine reassuringly.

Yes, the prince will come through the forest, said the little snowdrop gleefully.

Fear not, dear Barbara, we shall behold the prince in all his glory, cried the snowflake.

Then all at once there was a strange hubbub in the forest; for it was midnight, and the spirits came from their hiding-places to prowl about and to disport themselves. Barbara beheld them all in great wonder and trepidation, for she had never before seen the spirits of the forest, although she had often heard of them. It was a marvellous sight.

Fear nothing, whispered the vine to Barbara, -- fear nothing, for they dare not touch you.

The antics of the wood-spirits continued but an hour; for then a cock crowed, and immediately thereat, with a wondrous scurrying, the elves and the gnomes and the other grotesque spirits sought their abiding-places in the caves and in the hollow trunks and under the loose bark of the trees. And then it was very quiet once more in the forest.

It is very cold, said Barbara. My hands and feet are like ice.

Then the pine-tree and the fir shook down the snow from their broad boughs, and the snow fell upon Barbara and covered her like a white mantle.

You will be warm now, said the vine, kissing Barbara's forehead. And Barbara smiled.

Then the snowdrop sang a lullaby about the moss that loved the violet. And Barbara said, I am going to sleep; will you wake me when the prince comes through the forest?

And they said they would. So Barbara fell asleep. 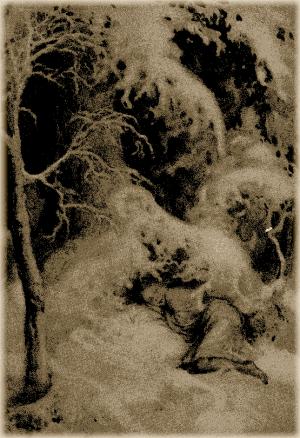