Part I. The City

WHIRR-R-R! whirr-r-r! whirr-r-r! said the wind, and it tore through the streets of the city that Christmas eve, turning umbrellas inside out, driving the snow in fitful gusts before it, creaking the rusty signs and shutters, and playing every kind of rude prank it could think of.

How cold your breath is to-night! said Barbara, with a shiver, as she drew her tattered little shawl the closer around her benumbed body.

I have no home, said Barbara; and then she sighed bitterly, and something like a tiny pearl came in the corner of one of her sad blue eyes.

But the wind did not hear her answer, for it had hurried up the street to throw a handful of snow in the face of an old man who was struggling along with a huge basket of good things on each arm.

Why are you not at the cathedral? asked a snowflake, as it alighted on Barbara's shoulder. I heard grand music, and saw beautiful lights there as I floated down from the sky a moment ago.

What are they doing at the cathedral? inquired Barbara.

Why, haven't you heard? exclaimed the snowflake. I supposed everybody knew that the prince was coming to-morrow.

Surely enough; this is Christmas eve, said Barbara, and the prince will come tomorrow.

Barbara remembered that her mother had told her about the prince, how beautiful and good and kind and gentle he was, and how he loved the little children; but her mother was dead now, and there was none to tell Barbara of the prince and his coming, none but the little snowflake.

I should like to see the prince, said Barbara, for I have heard he was very beautiful and good.

That he is, said the snowflake. I have never seen him, but I heard the pines and the firs singing about him as I floated over the forest to-night.

Whirr-r-r! whirr-r-r! cried the wind, returning boisterously to where Barbara stood. I've been looking for you everywhere, little snowflake! So come with me.

And without any further ado, the wind seized upon the snowflake and hurried it along the street and led it a merry dance through the icy air of the winter night.

Barbara trudged on through the snow and looked in at the bright things in the shop windows. The glitter of the lights and the sparkle of the vast array of beautiful Christmas toys quite dazzled her. A strange mingling of admiration, regret, and envy filled the poor little creature's heart. 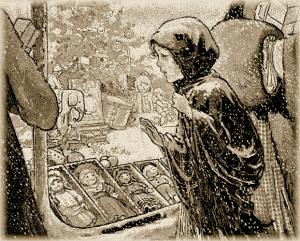 Much as I may yearn to have them, it cannot be, she said to herself, yet I may feast my eyes upon them.

Go away from here! said a harsh voice. How can the rich people see all my fine things if you stand before the window? Be off with you, you miserable little beggar!

It was the shopkeeper, and he gave Barbara a savage box on the ear that sent her reeling into the deeper snowdrifts of the gutter.

Presently she came to a large house where there seemed to be much mirth and festivity. The shutters were thrown open, and through the windows Barbara could see a beautiful Christmas-tree in the centre of a spacious room -- a beautiful Christmas-tree ablaze with red and green lights, and heavy with toys and stars and glass balls and other beautiful things that children love. There was a merry throng around the tree, and the children were smiling and gleeful, and all in that house seemed content and happy. Barbara heard them singing, and their song was about the prince who was to come on the morrow.

This must be the house where the prince will stop, thought Barbara. How I would like to see his face and hear his voice! yet what would he care for me, a 'miserable little beggar'? 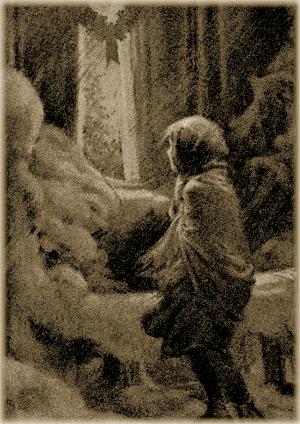 So Barbara crept on through the storm, shivering and disconsolate, yet thinking of the prince.

Where are you going? she asked of the wind as it overtook her.

To the cathedral, laughed the wind. The great people are flocking there, and I will have a merry time amongst them, ha, ha, ha!

And with laughter the wind whirled away and chased the snow toward the cathedral.

It is there, then, that the prince will come, thought Barbara. It is a beautiful place, and the people will pay him homage there. Perhaps I shall see him if I go there.

Please, can I go and sit inside? inquired Barbara of the sexton.

No! said the sexton gruffly, for this was an important occasion with the sexton, and he had no idea of wasting words on a beggar child.

But I will be very good and quiet, pleaded Barbara. Please may I not see the prince?

I have said no, and I mean it, retorted the sexton.

What have you for the prince, or what cares the prince for you? Out with you, and don't be blocking up the door-way! So the sexton gave Barbara an angry push, and the child fell half-way down the icy steps of the cathedral. She began to cry. Some great people were entering the cathedral at the time, and they laughed to see her falling.

Have you seen the prince? inquired a snowflake, alighting on Barbara's cheek. It was the same little snowflake that had clung to her shawl an hour ago, when the wind came galloping along on his boisterous search.

Ah, no! sighed Barbara in tears; but what cares the prince for me?

Do not speak so bitterly, said the little snowflake. Go to the forest and you shall see him, for the prince always comes through the forest to the city.

Despite the cold, and her bruises, and her tears, Barbara smiled. In the forest she could behold the prince coming on his way; and he would not see her, for she would hide among the trees and vines.

Whirr-r-r, whirr-r-r! It was the mischievous, romping wind once more; and it fluttered Barbara's tattered shawl, and set her hair to streaming in every direction, and swept the snowflake from her cheek and sent it spinning through the air.

Barbara trudged toward the forest. When she came to the city gate the watchman stopped her, and held his big lantern in her face, and asked her who she was and where she was going.

I am Barbara, and I am going into the forest, said she boldly.

Into the forest? cried the watchman, and in this storm? No, child; you will perish!

But I am going to see the prince, said Barbara. They will not let me watch for him in the church, nor in any of their pleasant homes, so I am going into the forest.

The watchman smiled sadly. He was a kindly man; he thought of his own little girl at home.

No, you must not go to the forest, said he, for you would perish with the cold.

But Barbara would not stay. She avoided the watchman's grasp and ran as fast as ever she could through the city gate.

Come back, come back! cried the watchman; you will perish in the forest!

But Barbara would not heed his cry. The falling snow did not stay her, nor did the cutting blast. She thought only of the prince, and she ran straightway to the forest.