Once upon a time the forest was in a great commotion. Early in the evening the wise old cedars had shaken their heads ominously and predicted strange things. They had lived in the forest many, many years; but never had they seen such marvellous sights as were to be seen now in the sky, and upon the hills, and in the distant village.

Pray tell us what you see," pleaded a little vine; "we who are not as tall as you can behold none of these wonderful things. Describe them to us, that we may enjoy them with you.

I am filled with such amazement, said one of the cedars, that I can hardly speak. The whole sky seems to be aflame, and the stars appear to be dancing among the clouds; angels walk down from heaven to the earth, and enter the village or talk with the shepherds upon the hills.

The vine listened in mute astonishment. Such things never before had happened. The vine trembled with excitement. Its nearest neighbor was a tiny tree, so small it scarcely ever was noticed; yet it was a very beautiful little tree, and the vines and ferns and mosses and other humble residents of the forest loved it dearly.

As the vine and the little tree talked of these things, the cedars watched with increasing interest the wonderful scenes over and beyond the confines of the forest. Presently they thought they heard music, and they were not mistaken, for soon the whole air was full of the sweetest harmonies ever heard upon earth.

What beautiful music! cried the little tree. I wonder whence it comes.

The angels are singing, said a cedar; for none but angels could make such sweet music.

But the stars are singing, too, said another cedar; yes, and the shepherds on the hills join in the song, and what a strangely glorious song it is!

The trees listened to the singing, but they did not understand its meaning: it seemed to be an anthem, and it was of a Child that had been born; but further than this they did not understand. The strange and glorious song continued all the night; and all that night the angels walked to and fro, and the shepherdfolk talked with the angels, and the stars danced and carolled in high heaven. And it was nearly morning when the cedars cried out, They are coming to the forest! the angels are coming to the forest! And, surely enough, this was true. The vine and the little tree were very terrified, and they begged their older and stronger neighbors to protect them from harm. But the cedars were too busy with their own fears to pay any heed to the faint pleadings of the humble vine and the little tree. The angels came into the forest, singing the same glorious anthem about the Child, and the stars sang in chorus with them, until every part of the woods rang with echoes of that wondrous song. There was nothing in the appearance of this angel host to inspire fear; they were clad all in white, and there were crowns upon their fair heads, and golden harps in their hands; love, hope, charity, compassion, and joy beamed from their beautiful faces, and their presence seemed to fill the forest with a divine peace. The angels came through the forest to where the little tree stood, and gathering around it, they touched it with their hands, and kissed its little branches, and sang even more sweetly than before. And their song was about the Child, the Child, the Child that had been born. Then the stars came down from the skies and danced and hung upon the branches of the tree, and they, too, sang that song, the song of the Child. And all the other trees and the vines and the ferns and the mosses beheld in wonder; nor could they understand why all these things were being done, and why this exceeding honor should be shown the little tree. 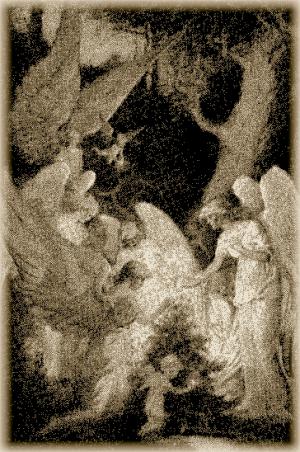 When the morning came the angels left the forest, -- all but one angel, who remained behind and lingered near the little tree. Then a cedar asked: Why do you tarry with us, holy angel? And the angel answered: I stay to guard this little tree, for it is sacred, and no harm shall come to it.

The little tree felt quite relieved by this assurance, and it held up its head more confidently than ever before. And how it thrived and grew, and waxed in strength and beauty! The cedars said they never had seen the like. The sun seemed to lavish its choicest rays upon the little tree, heaven dropped its sweetest dew upon it, and the winds never came to the forest that they did not forget their rude manners and linger to kiss the little tree and sing it their prettiest songs. No danger ever menaced it, no harm threatened; for the angel never slept, through the day and through the night the angel watched the little tree and protected it from all evil. Oftentimes the trees talked with the angel; but of course they understood little of what he said, for he spoke always of the Child who was to become the Master; and always when thus he talked, he caressed the little tree, and stroked its branches and leaves, and moistened them with his tears. It all was so very strange that none in the forest could understand.

So the years passed, the angel watching his blooming charge. Sometimes the beasts strayed toward the little tree and threatened to devour its tender foliage; sometimes the woodman came with his axe, intent upon hewing down the straight and comely thing; sometimes the hot, consuming breath of drought swept from the south, and sought to blight the forest and all its verdure: the angel kept them from the little tree. Serene and beautiful it grew, until now it was no longer a little tree, but the pride and glory of the forest.

One day the tree heard some one coming through the forest. Hitherto the angel had hastened to its side when men approached; but now the angel strode away and stood under the cedars yonder.

Dear angel, cried the tree, can you not hear the footsteps of some one approaching? Why do you leave me?

Have no fear, said the angel; for He who comes is the Master.

The Master came to the tree and beheld it. He placed His hands upon its smooth trunk and branches, and the tree was thrilled with a strange and glorious delight. Then He stooped and kissed the tree, and then He turned and went away.

Many times after that the Master came to the forest, and when He came it always was to where the tree stood. Many times He rested beneath the tree and enjoyed the shade of its foliage, and listened to the music of the wind as it swept through the rustling leaves. Many times He slept there, and the tree watched over Him, and the forest was still, and all its voices were hushed. And the angel hovered near like a faithful sentinel.

Ever and anon men came with the Master to the forest, and sat with Him in the shade of the tree, and talked with Him of matters which the tree never could understand; only it heard that the talk was of love and charity and gentleness, and it saw that the Master was beloved and venerated by the others. It heard them tell of the Master's goodness and humility, how He had healed the sick and raised the dead and bestowed inestimable blessings wherever He walked. And the tree loved the Master for His beauty and His goodness; and when He came to the forest it was full of joy, but when He came not it was sad. And the other trees of the forest joined in its happiness and its sorrow, for they, too, loved the Master. And the angel always hovered near.

The Master came one night alone into the forest, and His face was pale with anguish and wet with tears, and He fell upon His knees and prayed. The tree heard Him, and all the forest was still, as if it were standing in the presence of death. And when the morning came, lo! the angel had gone.

Then there was a great confusion in the forest. There was a sound of rude voices, and a clashing of swords and staves. Strange men appeared, uttering loud oaths and cruel threats, and the tree was filled with terror. It called aloud for the angel, but the angel came not.

Alas, cried the vine, they have come to destroy the tree, the pride and glory of the forest!

The forest was sorely agitated, but it was in vain. The strange men plied their axes with cruel vigor, and the tree was hewn to the ground. Its beautiful branches were cut away and cast aside, and its soft, thick foliage was strewn to the tenderer mercies of the winds.

They are killing me! cried the tree; why is not the angel here to protect me? 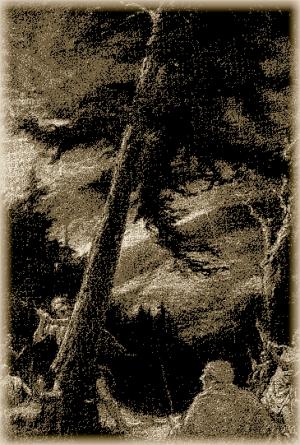 But no one heard the piteous cry, none but the other trees of the forest; and they wept, and the little vine wept too.

Then the cruel men dragged the despoiled and hewn tree from the forest, and the forest saw that beauteous thing no more.

But the night wind that swept down from the City of the Great King that night to ruffle the bosom of distant Galilee, tarried in the forest awhile to say that it had seen that day a cross upraised on Calvary, -- the tree on which was stretched the body of the dying Master.