The Eagle And The Beetle 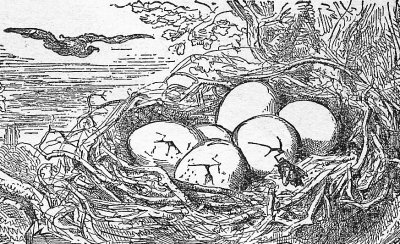 THE EAGLE and the Beetle were at enmity together, and they destroyed one another's nests. The Eagle gave the first provocation in seizing upon and eating the young ones of the Beetle. The Beetle got by stealth at the Eagle's eggs, and rolled them out of the nest, and followed the Eagle even into the presence of Jupiter. On the Eagle making his complaint, Jupiter ordered him to make his nest in his lap; and while Jupiter had the eggs in his lap, the Beetle came flying about him, and Jupiter rising up unawares to drive him away from his head, threw down the eggs and broke them.

Moral:
The weak often revenge themselves on those who use them ill, even though they be the more powerful.

The Ass, the Fox, and the LionThe Heifer and the OxThe Farmer and the CranesThe Stag, the Wolf, and the SheepThe Fox and the CrowThe Hawk, the Kite, and the PigeonsThe Raven and the SwanThe Fisherman and the Little FishThe Lion and the Three BullsThe Fox and the GoatThe Trumpeter Taken PrisonerThe Old HoundThe Crab and Its MotherThe Farmer and His SonsThe Ass and the WolfThe Bees, The Drones, And The WaspThe Seagull and the KiteThe Frogs Asking for a KingThe Dog And His Master's DinnerThe Fatal Marriage
Link To This Page